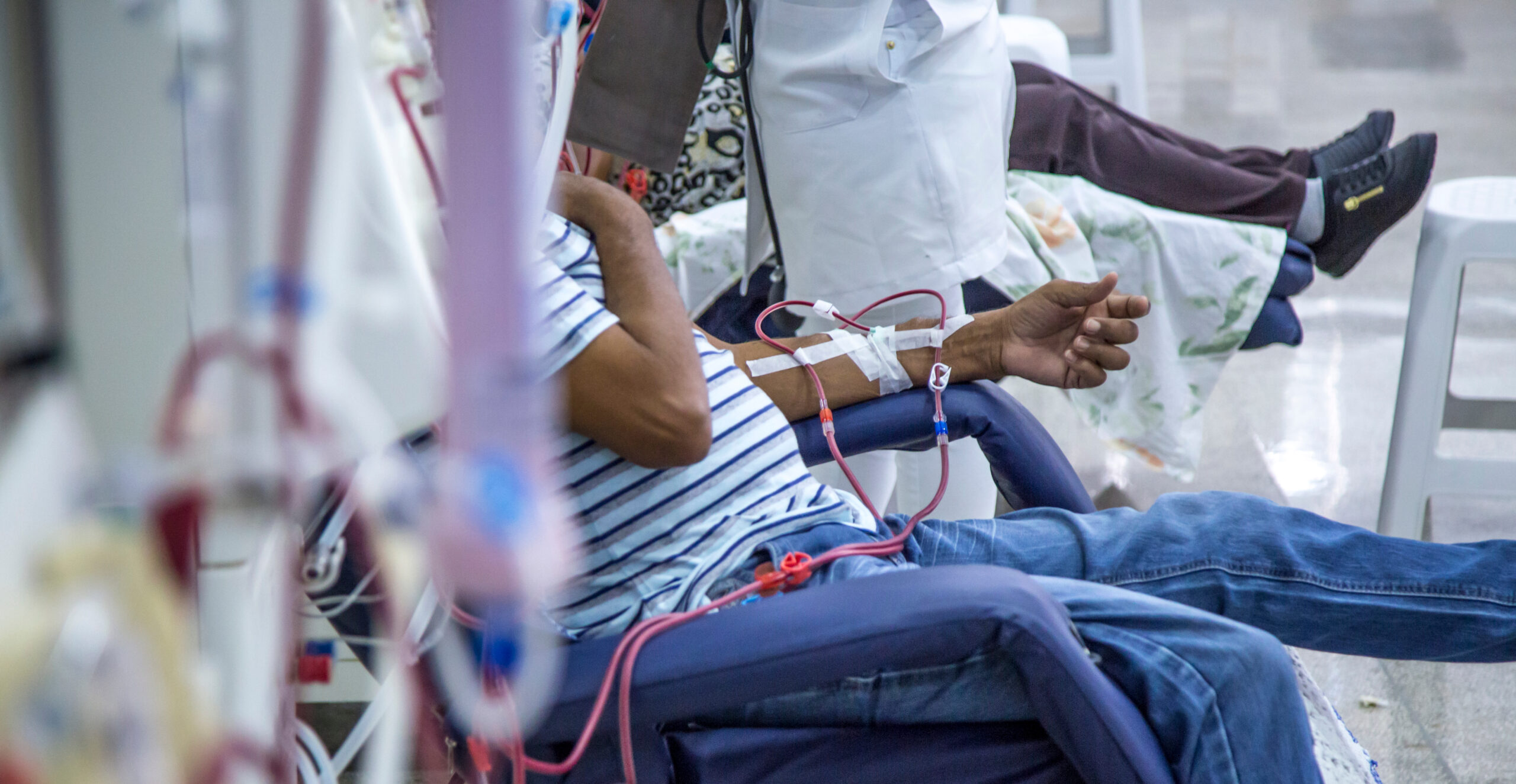 Dialysis in Africa Costs 20x the Average Annual Income, So Why Was the World’s Largest Dialysis Company Bribing Government Officials?

In March 2019, Fresenius Medical Care AG & Co. KGaA (Fresenius), the German-based world’s largest manufacturer of dialysis products (and clinic operator), agreed to “pay about $231 million to resolve criminal and civil allegations that the company paid bribes to public health and government officials in several countries to win or retain business.” Some of the “several countries” where the company was alleged to have “paid bribes to public health and government officials” are Angola, Morocco, Benin, Burkina Faso, Cameroon, Ivory Coast, Niger, Gabon, Chad and Senegal. Here’s an excerpt from the DoJ press release:

In West Africa, Fresenius knowingly paid bribes to publicly employed health officials and government-employed doctors in numerous countries, including Benin, Burkina Faso, Cameroon, the Ivory Coast, Niger, Gabon, Chad and Senegal. For example, Fresenius employees met with representatives of a Gabon state-owned hospital and proposed a five-year agreement that would include the “prices plus the commission” that the officials would receive for each kit sold. A Fresenius employee responsible for sales in West Africa reported that the agreement would provide for a €12 commission for each kit sold, which was intended as a “commission for the three persons who sign the contract with us.”

CKD in Africa: The Statistics

Before we go further, let’s take a brief look at some statistics behind Chronic Kidney Disease in Africa. CKD is the 12th leading cause of death in the world today. The prevalence rate of the disease is expected to continue rising fastest in Asia & Africa, where rampant urbanization is leading to  drastic lifestyle changes – causing more lifestyle diseases like diabetes & hypertension — the main causes of CKD. Today, there are ~70 million people in Africa who are living with CKD. ~1 million of them are in the end-stage of the disease and thus, require renal replacement therapy (dialysis or kidney transplant) to survive. Unfortunately, less than 10% of them have access to any form of renal replacement therapy. Of those fortunate enough to access dialysis, 85% of them cannot afford to continue the treatment past the 1st three months. The outcome of these statistics is that ~400,000 people die in Africa every year because they cannot access (or continue) dialysis treatment. 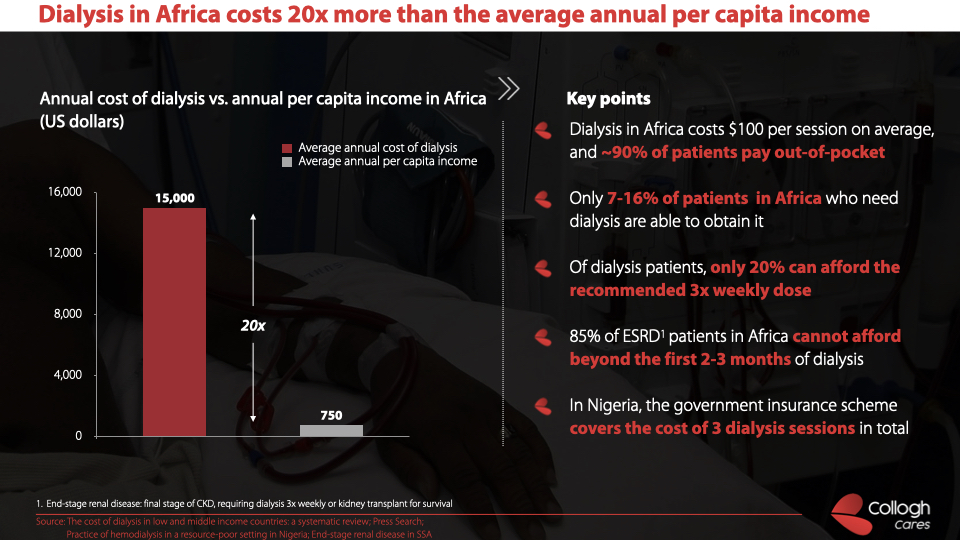 This is utterly unacceptable; especially when you consider that dialysis treatment was invented in early 1940s, and countries such as Japan, USA, Canada, Germany, United Kingdom have a treatment rate of >90%. The reasons for this massive health inequity (as with most access-to-health issues on the Continent) are tied to 2 main factors: supply and cost, to put it in Microeconomics parlance. Africa has ~ 20 hemodialysis machines per million population. For context, USA has 1700 machines PMP, Japan has 1400 machines PMP and Germany has 800 machines PMP.  An extremely conservative estimate puts the average cost of a dialysis session in Africa at $100 USD. Based on this estimate and the clinical requirement of 3 dialysis sessions weekly, annual cost of dialysis in Africa is ~$15,000 USD. Meanwhile, almost 90% of patients across the Continent have to pay for this out-of-pocket. Therefore, dialysis treatment is out of reach for many, considering the average annual income on the Continent is ~$750 USD — 20 times the annual cost of dialysis treatment. Countries such as Rwanda and Tanzania have rolled out national health schemes to cover the costs of dialysis for their citizens, but most countries are yet to adopt such progressive measures. For example, in Nigeria – the so-called “Giant of Africa” – the government covers the cost of 3 dialysis sessions in total. I’ll repeat that, to ensure you have not misread it — the Nigerian government covers the cost of (ONLY) 3 dialysis sessions in total! Remember, this is a therapy that most kidney failure patients need 3 times weekly for the rest of their lives. 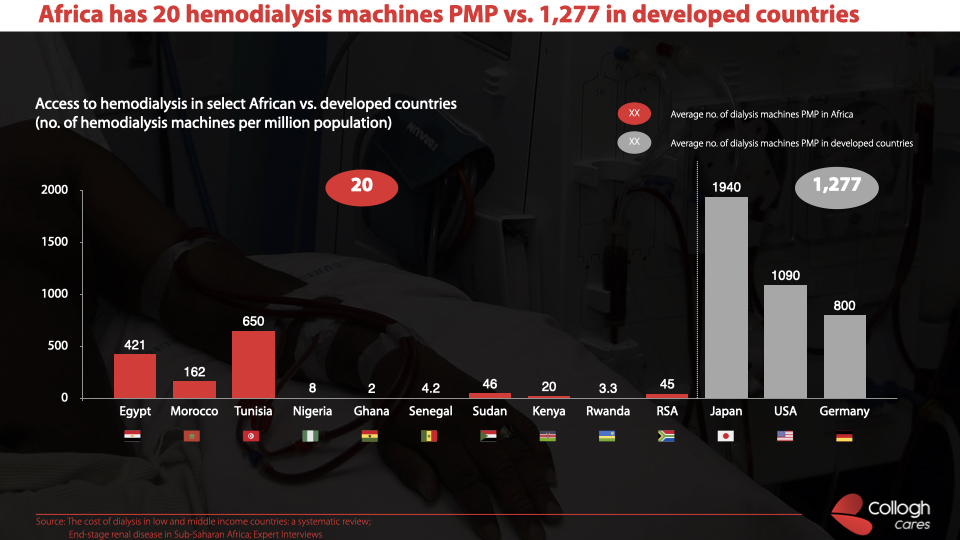 “We do not prioritize dialysis in Africa…”

Back to the source of this writer’s ire. How can global manufacturers working in such an impoverished context allow greed to overcome their collective sense of humanity? Why is there not widespread focus on increasing the supply of hemodialysis machines (and consumables) and reducing the costs of the treatment across the Continent? Why are national governments, international development agencies, global manufacturers, public health officials, medical professionals, and entrepreneurs not coming together to decry such acts of corruption and exploitation, and implement concrete actions towards democratizing access to renal replacement therapy? I’ve asked these very questions to representatives of the major global manufacturers and international development agencies. My interpretation of most of their answers is basically, “they do not care”. In fact, a global health expert working for an American international foundation told me bluntly, “we do not prioritize dialysis treatments in Africa, because it is too expensive and the quality of life is poor.” So basically, they do not care.

Thankfully, there are some sprouts of hope. For example, the Africa Healthcare Network, founded in 2015, has built the first and largest dialysis chain across Sub-Saharan Africa, with centres in Tanzania, Rwanda, Burundi, and Kenya. Incredibly, AHN has been able to offer world-class dialysis services at ~20% less than standard prices — proof that entrepreneurs with the right level of expertise, passion and determination to change the status quo can help to increase access to dialysis in Africa. Put another way, the problem of access to kidney failure treatment in Africa can be solved if there were more stakeholders who actually cared. 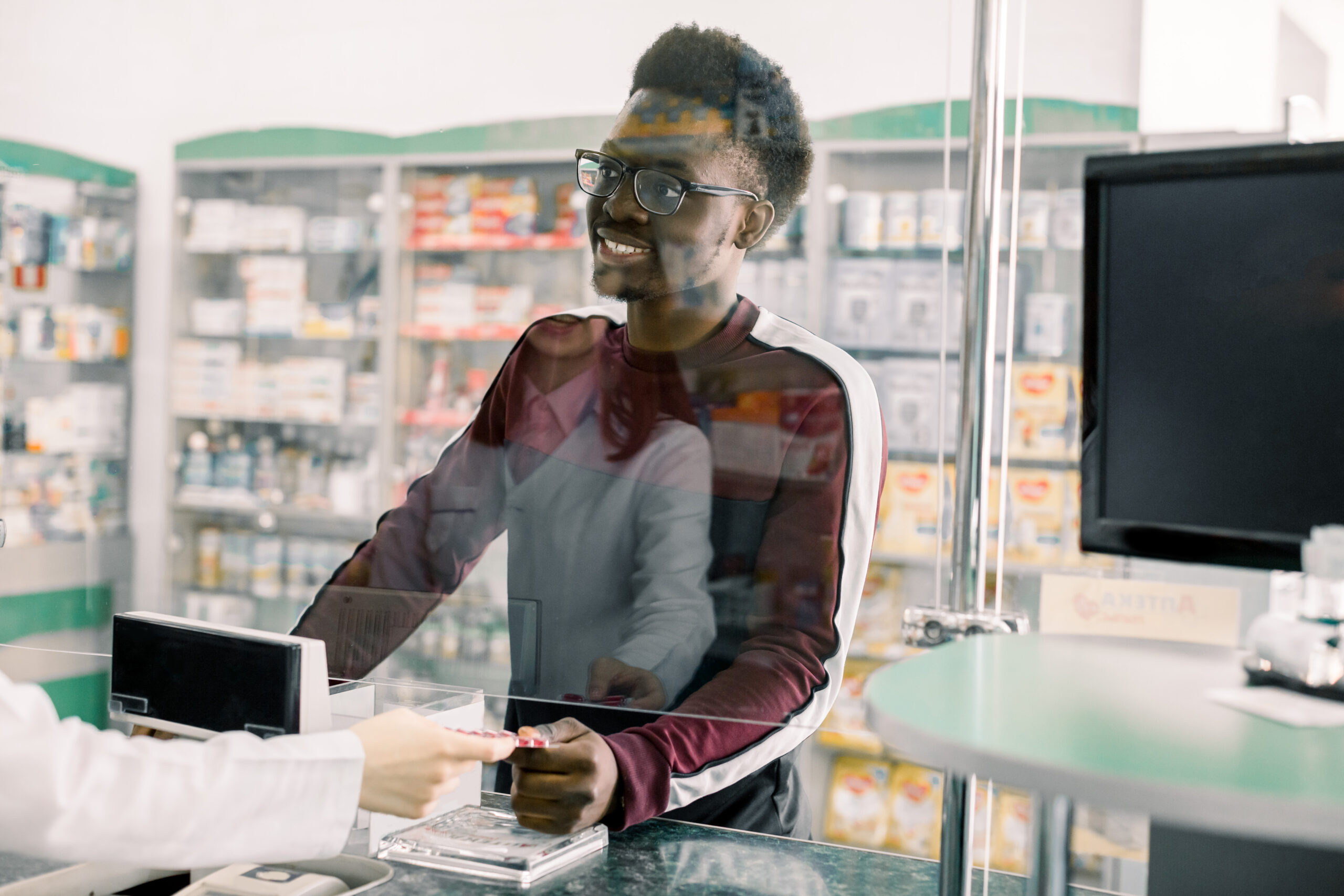 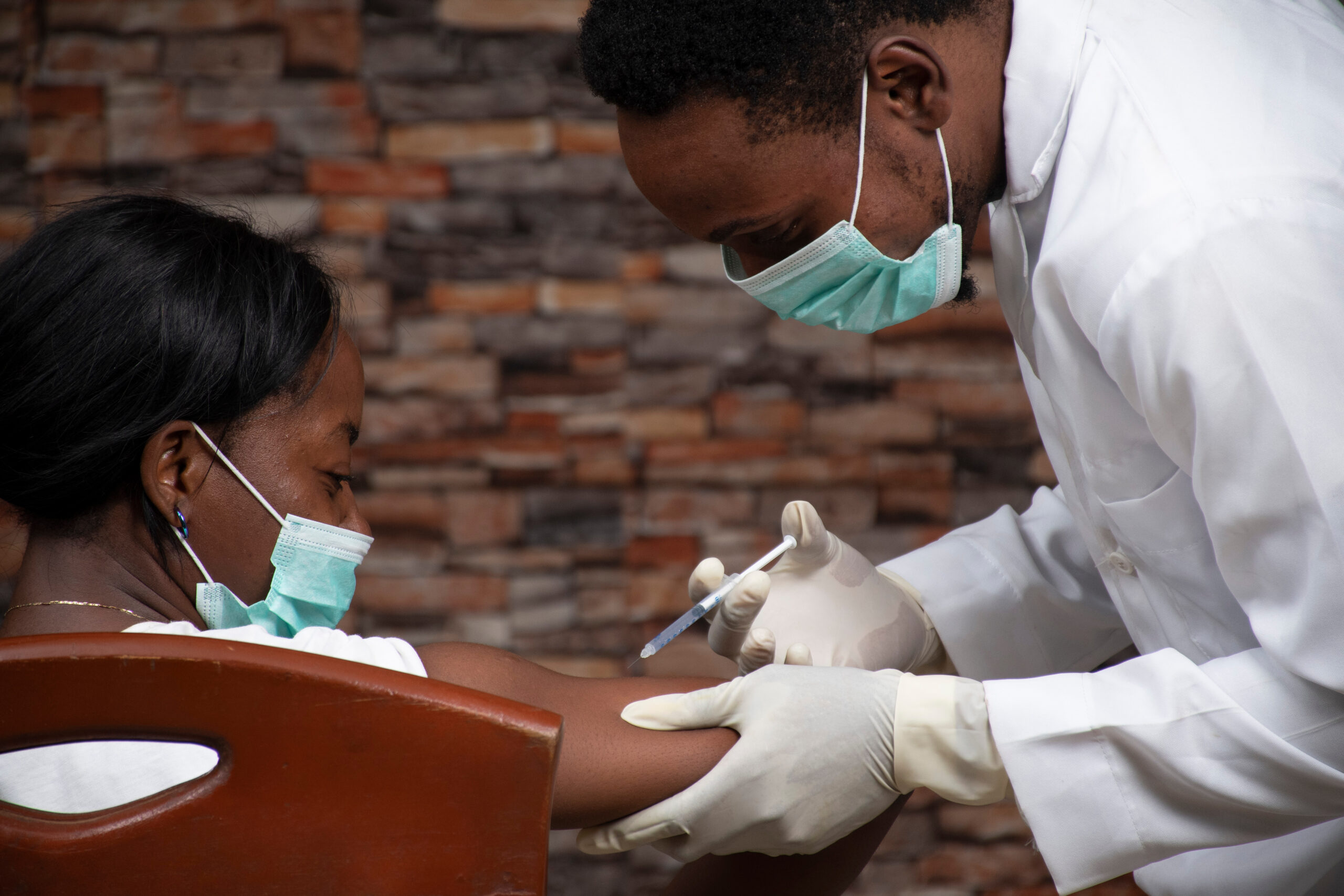 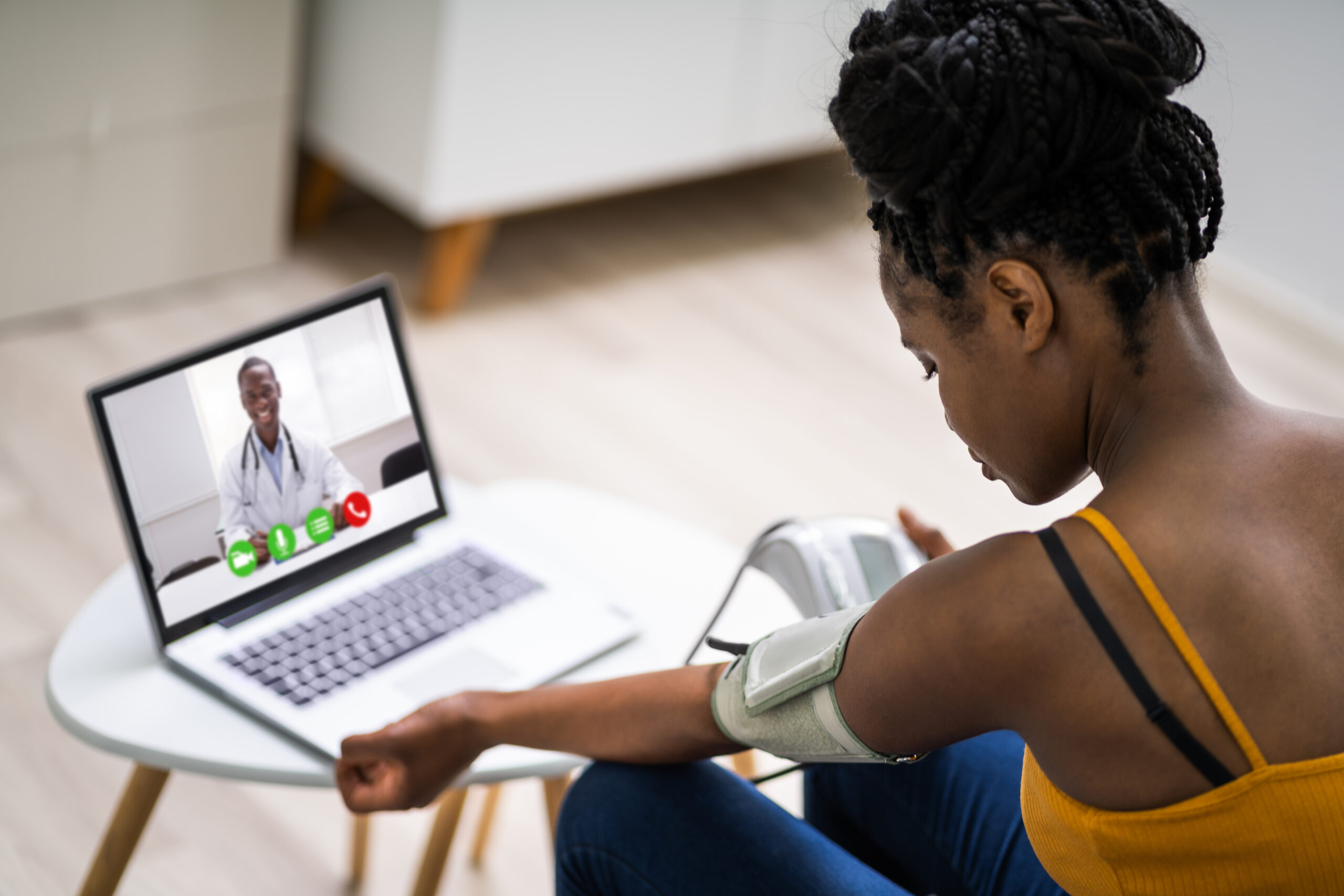 Open chat
1
Free Consultation
Do you have kidney disease and would like to speak to someone? Speak to our medical concierge for free immediately